Eleven LandCare team members loaded up two vans on Friday, September 22, and set off to test their endurance and perseverance during a two-day team relay in Cumberland, MD. Fighting nerves and excitement, Team LandCare readied their minds and bodies to take on the challenge ahead. Approximately 200 miles lay in front of them, split up into 36 legs. The team would alternate runners through the course, beginning on Friday morning and ending Saturday afternoon. The two vans followed each other, swapping team members at each leg. They napped when they could, fueling up on snacks and energy drinks. Pep talks and encouraging cheers from friends and family pushed them to finish the race. This was the Reebok Ragnar in Washington, D.C., and Team LandCare came to conquer.

The team was handicapped from the start. They struggled to hang on to a full team, plagued with injuries and scheduling conflicts. Never ones to turn away from a challenge, CEO Mike Bogan and Account Manager Kevin Boylan took on three extra legs to pick up the slack left from an absent runner. Despite this initial setback, the first van set out Friday at 9:30 am without further hindrance — that is, until the afternoon.

At this point, Northeast Controller Shawna Herr had jumped into the race for van two. Nearing the end of her first run, she ran into her worst nightmare; the remains of a snake blocking her path. “I almost had a panic attack right there on mile 6,” Shawna recalled, laughing nervously. “I’m terrified of snakes, so of course I saw one on my first run.” Slightly paranoid but feeling well enough to continue, van two proceeded to finish their leg, stopping at a nearby high school for a spaghetti dinner in the cafeteria and a two-hour cat-nap.

Meanwhile, van one took on the notorious night run, navigating their way through small Civil War era towns of eastern Maryland. Using headlights clipped to their hats, each member faced two-lane country roads, seeing nothing else except the faint lights of runners around them. The night air was thick, to the point where Tre Hiltzheimer felt like he was wearing glasses that were constantly fogging up. The Branch Manager for Atlanta North was already well adapted to hot climates, but what he wasn’t prepared for was the long run through a dense night with mostly nothing else in front or behind him. And at one point during the night course, the race stopped as security dealt with a local harassing the runners. This was quickly resolved and the race continued.

Van two woke up at 1 am and met up with van one near a dairy farm, trading jokes and jabs about running times and their various levels of exhaustion. In the vans, the atmosphere and energy remained positive and fun. Tre noted that in the beginning, everyone was overly conscientious about keeping areas and themselves sanitary and clean. But by the end of the race, Team LandCare “just got comfortable with each other. We took turns sitting in the sweaty seat.” Operations Program Administrator Amber Fitzgerald exclaims, “My favorite part of the race would have to be cheering on the team. Seeing the smile from the runner assured you they were ok – that general smirk of an honest “thank you for being here with me” – that was the meaning to the entire event, TEAM!”

Van two proceeded to run till dawn with Baltimore’s Branch Administrator Tyler Benoit and Branch Manager Aaron Engel. At one point during his run, Aaron looked up to see the sun peeking through the trees, fading away the darkness on the rural Maryland farmland. The end was within reach.

On the first mile of the last twelve-mile stretch, Justin Martin, Midsouth Regional Vice President, felt pressure building on the outer part of his right thigh. At this point, Director of Training and Development Kory Beidler still had another six miles to run and was suffering from a large blister on his foot. The team was starting to fall apart. Instead of tapping out, both finished the full twelve miles together, running and hobbling through the National Mall to cross the finish. They were met by cheers and jubilation from the rest of the team members waiting for them at the finish line.

Despite their collective soreness and troubles along the way, Team LandCare completed the relay in the middle of the pack of finishers, with an impressive final time of 32 hours and 33 minutes.

Teamwork is fostered through shared feelings and experiences. Although most people wouldn’t choose to subject themselves to two days of running, LandCare’s team members elected to take on these challenges with each other and on their own time. Despite the overwhelming challenges, the team members reminisced and shared many laughs of their personal struggles with the course. It became clear that the race wasn’t so much about the physically exhausting trek as it was about rallying together, encouraging each other, having fun, and finishing with pride for what they had accomplished as a unit. Justin Martin fondly remarks, “as a group we pushed our limits, got to know each other better and had a great time.  [I’m] so proud to be part of this team.” Team LandCare reflected the LandCare core value of having fun with a commitment to teamwork. And they would do it all again. 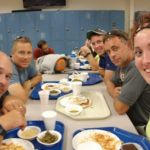 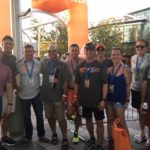 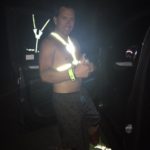 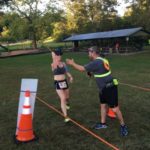 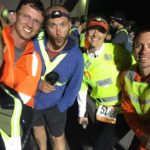